I noticed a few people have been googling for this so I just thought I’ll post a short how-to on this.

Let me first say that before the combined IE9 + language pack came out I tried to bundle IE9 and the language pack with the Internet Explorer Administrator Toolkit (IEAK). That worked fine but I wasn’t able to deploy that package in the Task Sequence. I don’t know why this didn’t work because the package deployed fine with normal software deployment.

Since then MS has released IE with the integrated language pack, you can find all versions here: 32bit and 64bit

Deploying is very simple. Simply create a package with the following program Command Line,  depending a little bit on which IE9-exe file you’ve downloaded:

Advertise the program or put it in your Task-Sequence after “Setup Windows and ConfigMgr”.

If you want to be able to choose between languages for Internet Explorer in your Task-sequence you can always bundle the English IE9-version in your base-image and then run the language-packs on top of that. The language packs for IE9 and Windows 7 are found here.

The language packs come as MSU-files that are installable through the WUSA-command. So to install the 64bit version of the Swedish language pack on top of an English Internet Explorer 9, simply run:

Of course, remember to download the matching version of the language pack depending on if you’re using 32- or 64bit Windows.

Important Update2:
Internet Explorer 9 Setup does a really evil thing in the registry. It creates this key:

This little registry key breaks all Active Setup commands for 64-bit Windows 7! Note that this regkey is not set on the SysWOW64 registry folder so it only applies  to 64-bit Active Setup. Therefore the command that’s supposed to create shortcuts for the taskbar and Start Menu doesn’t run. Instead you might end up with a broken IE9-icon that points to the users Home Directory (i.e. H:) !

Apparently, this key was used in IE5(!) when you wanted the installation to be really, really quiet.

So in order to have a successful installation, delete this reg-key after the installation of IE9. Here’s a link how to do it:

I found the information regarding this bug here.

[EDIT: WUSA. Not WUSE. Thanks Kcirtap!]

This util is since the times of SMS 2003 but deserves to be mentioned. It’s the ConfigMgr 2007 Distribution Point Package Utility.  If you want to remove a distribution point, you need to delete all packages on it before removing it. Otherwise the packages will “miss” its’ distribution point. This will appear has hundreds of error messages in the SCCM-log and can be a bit annoying. Another use is if you want to add a new DP to SCCM and don’t want to go through the labor to add all packages one by one to the new DP. 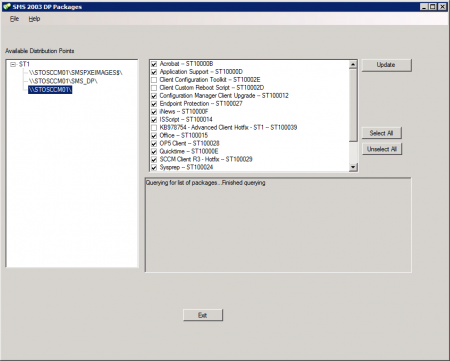