I’m just putting this here because I was so satisfied that I could do this with one line in Powershell instead of a whole lot more in DOS or VBScript.

List all subfolders in a folder with a depth of one (all folders only in the first level of a directly) to a file and sort everything nicely. You need Powershell v5 or you’ll get an error from some of the parameters.

In System Center Configuration Manager 2012 Release 2, Service Pack 1, Cumulative Update 1. There is a bug. If you try to do offline servicing to a Windows 10 Operating System Image (also known as a Scheduled Update) there will be exactly zero visible software updates in the console to apply to the image. It’s annoying but it takes only 30 seconds to fix. But why does this happen? I’ll show you!

This is from SMSProv.log at the same time I tried to Schedule an update and as

Sometimes what seems so easy turns out to be a little bit more complicated.

If you install the MDT-extensions for SCCM 2012 you will get the excellent option to add roles and features. It turns out that only .Net Framework 4.5 will actually install and not 3.5 if you’re installing Windows 8 / Server 2012. The media is on the source media (*.iso/DVD) but not a part of Windows by default. 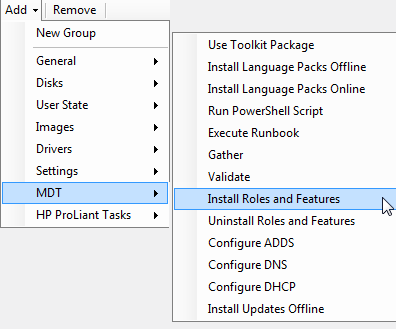 You try to connect to the SCCM 2012 Data Source but Report Builder throws this error:

“A connection was successfully established with the server, but then an error occurred during the pre-login handshake. (provider: SSL Provider, error: 0 – The certificate chain was issued by an authority that is not trusted.)” 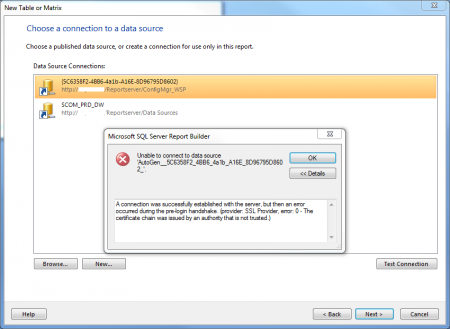 This is because the connection needs to be authenticated by the means of a certificate that is on the SQL-server which your client doesn’t have. You need to export the “ConfigMgr SQL Server Identification Certificate” from your SQL Server Personal store to your clients Trusted Root store. Here’s a How-To: 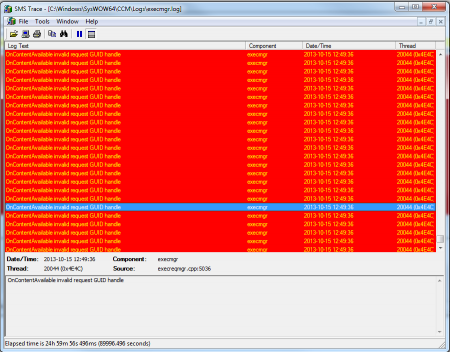 Isn’t it annoying when a customer has a “bad” AD-structure that makes it impossible to run user-discovery or system discovery often enough? By “bad” AD-structure I mean putting computers or users for an entire organization in one OU for example. The drawback of not being able to run User/System-discovery often enough is that users will have to wait for their applications after the computer is installed since SCCM doesn’t know about the group memberships until the discovery tasks are run.

I’ve come up with a method for inventoring only one computer/user. In this first post of two I’ll describe the process for users, which is useful if you run user-based installations.

Yes, you can place the cursor on the Package Folder in the SCCM-console and select
Show->Export List to export all packages in a folder. BUT. There seems to be a limit to maximum 500 packages so you will not get all packages in your folder if you have a lot of them. AND maybe someone in management want the report as a webreport too… So here are the three things you need to do.

With Windows 7, creating a report in SCCM for all your computers is really simple. First you need to expand your sms_def.mof file to gather the Bitlocker status data that is stored in WMI on your clients.

Insert this at the bottom of
%Program Files%\Microsoft Configuration Manager\inboxes\clifiles.src\hinv\sms_def.mof